Maltster and malted ingredients company Muntons is putting the finishing touches to a £5.4m anaerobic digestion (AD) plant at its Stowmarket site in Suffolk. This will help turn up to 80,000 tonnes of liquid malt waste into a high quality bio-fertiliser while helping reduce Muntons’ CO2 emissions by 1,159 tonnes a year. The bio-fertiliser by-product of the AD process, known as digestate, will be used on local farmland, helping the company’s network of growers to produce some of the 250,000 tonnes of barley needed to make around 180,000 tonnes of Muntons’ malt each year.

Muntons is a company with sustainability at its core. Analysis showed that 60% of the carbon footprint of its supply chain came from the artificial fertiliser used by its barley growers. Unlike many AD projects where digestate is something of an afterthought, for Muntons it would help the firm meet its sustainability criteria. The firm realised that using its liquid malt waste as feedstock for an on-site AD plant would not only produce a high quality digestate for its farmers to use instead of artificial fertiliser, it would also cut 3,000 tanker movements per year and generate 25% of the site’s electricity demand.

Spreading 80,000 tonnes of liquid waste from Muntons’ processing plant to land was resulting in some 3,000 tanker journeys each year. The new treatment plant will remove the need for these journeys, plus it will capture nutrients such as phosphate which was previously lost when treated effluent was discharged to the river. The digestate is high in organic matter and will act as a soil conditioner and improver, and will have a wider application window than the liquid waste previously produced.

The digestate will be pasteurised to meet stringent PAS 110 standards using the HRS Heat Exchangers 3 Tank Batch system. Based on the plant’s feedstock derived from barley or water, pasteurisation ensures that the final fertiliser is free from plant pathogens or other biological contaminants.

As well as a comprehensive proposal, the Muntons’ team was impressed by the HRS system, which can save up to 70% of heat required, as well as its ability to run at a half flow rate, should the volume of digestate stock reduce. Additionally, the equipment’s monitoring feature enables Muntons to track every batch of digestate back to the feedstock from which it was produced. “The fact that the HRS system offers batch reporting was also a big draw; traceability is very important to us and our customers,” remarks Lawrence Howes, Project Engineer at Muntons.

Matt Hale, International Sales Manager at HRS, adds: “For Muntons this whole project has been about maximising efficiency. Although they have an abundance of heat, they still wanted to recapture what they could and our heat exchangers will provide 40% heat regeneration. Our system also allows the tanks to run at half flow rates if necessary. This means that you can still carry on pasteurising to comply with PAS 110 without having to wait to build up a stock of digestate.”

The HRS system works on a three tank principle; while one tank is being filled, the second tank holds the sludge at 70°C at the same time as the third tank is being emptied (each process lasts one hour). Waste cooling water from the CHP engine is used to heat the sludge in corrugated tube-in-tube heat exchangers, which is more efficient than heating an entire tank of digestate. HRS has also incorporated an energy recovery section into the process to make it even more efficient: energy is transferred from the hotter (pasteurised) sludge to the colder (unpasteurised) sludge, reducing energy consumption by up to 70% compared to normal systems and using heat which would otherwise be wasted.

After treatment in the HRS pasteurisation unit the digestate is passed through a centrifuge to remove water, resulting in a product which contains around 35% dry solids. “We expect growers to be able to apply the resulting fertiliser with a muck spreader or similar system,” explains Nigel Davies, Muntons’ Manufacturing and Sustainability Director. “By using waste solely from our manufacturing process we have full control over our feedstock – this ensures that our digestate will be free from plastics and other contaminants.”

The AD plant is currently undergoing commissioning and will become fully operational in late spring. For Muntons, the benefits are clear – better waste management, a reduction in tanker movements, energy generation, and a PAS 110 quality pasteurised digestate. All in all Muntons has significantly reduced its carbon footprint saving 1159 tonnes of CO2 pa (from 27,264 to 26,605) – the emission equivalent of 300 average family cars (approx.). 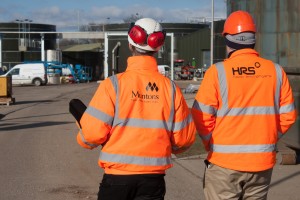